Many thanks to IntLawGrrls for inviting me to say a few words about my forthcoming article, Conceptualizing Complicity in Alien Tort Cases, in this guest post.
As many of you know, corporate liability for violations of international law under the Alien Tort Statute (ATS) remains hotly contested as a matter of domestic law and policy. (Prior IntLawGrrls posts, on the statute and on many of the cases I discuss, may be found here here.)
U.S. State Department Legal Adviser John B. Bellinger III recently lamented the failure of the U.S. Supreme Court to muster a quorum to consider the cert petition in Khulumani v. Barclay National Bank, an ATS case alleging corporate wrongdoing in conjunction with South African apartheid. Other pending corporate ATS cases include Presbyterian Church of Sudan v. Talisman Energy, which is awaiting oral argument before the Second Circuit, and Bowoto v. Chevron, which is about to be tried to a jury in federal court in San Francisco (voir dire is 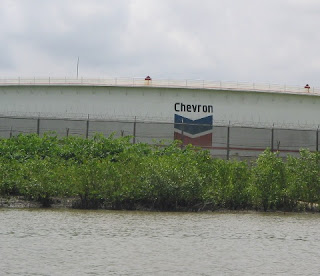 scheduled for today). Although legal issues in Bowoto may resurface on appeal, the factual dispute revolves around whether Chevron assisted the Nigerian government in using lethal force to remove peaceful protesters from one of Chevron’s offshore platforms, or whether Chevron legitimately sought help from Nigerian forces to displace a violent band of hostage-takers from the platform. (credit for photo of Chevron facility in Nigeria)
In the absence of Supreme Court guidance, lower courts have failed to agree on a consistent doctrinal approach to liability in corporate ATS cases. My article clarifies an important, and disputed, puzzle in these cases: whether U.S. law or international law governs the standard for aiding and abetting liability under the ATS. I conclude that international law governs aiding and abetting liability, and that the prevailing international law standard holds accomplices liable for knowingly providing assistance that has a substantial effect on the principal’s commission of a violation. I respectfully disagree with Bellinger, who suggested in his remarks that the Supreme Court’s 2004 decision in Sosa vs. Alvarez-Machain, which did not involve corporate liability, should be interpreted to bar virtually all of these cases. Courts may certainly invoke Sosa to support a finding of lack of subject matter jurisdiction in cases where plaintiffs have not alleged a sufficiently well established violation of international law, just as they may invoke a range of abstention doctrines to decline to exercise jurisdiction in appropriate circumstances. As it stands, however, courts have failed sufficiently to differentiate these aspects of their analyses, resulting in confusion over the proper application of the ATS and the scope of liability for aiding and abetting international law violations.
On a more reflective note:
We as academics may justifiably wonder if courts actually read what we have to say about doctrinal questions. (I must confess that, when I clerked for the Canadian Supreme Court, I relied almost entirely on case law and rarely, if ever, took a detour into scholarly literature to inform my legal analyses.) On the question of accomplice liability, however, I would respectfully suggest that no court opinion has yet articulated what I believe to be the most accurate and compelling analysis. My article presents this analysis, which I hope other scholars and, ultimately, judges, will find helpful and persuasive.
by Chimène Keitner at 6:02 AM