Deja Vu in the Congo

As 45,000 Congolese flee the internally displaced persons camp near Goma where they sought refuge, it's become clear that the festering wound of the Eastern Democratic Republic of Congo (DRC) has once again burst open. The political origins of the crisis are too complex to go into here (or, quite frankly, for yours truly to understand); suffice to say that the North and South Kivu provinces of the DRC have been the epicenter of massive refugee flows since 1994. Though I've never been, I have vivid pictures of the beauty of Lake Kivu and its surrounding region in my head, imprinted by my earliest asylu

m clients, who had fled the area after the violence resulting from the Rwandan genocide. After the Tutsi-led Rwandan Patriotic Front gained control of Rwanda, the Hutus fled into the Kivus, resulting in years of border skirmishes and at least two wars between the Hutus and Tutsis on either side of the border. MONUC, the UN Mission in the DRC, has been in place (under Chapter 7 of the UN Charter) for nearly ten years, since 1999. Today, 850 Indian soldiers from MONUC are the only military force in Goma, as the government soldiers have fled and the rebels have announced a unilateral cease fire before taking Goma so that civilians can flee. While the European Union "considers all options" and the UN sends in 80 more Guatemalan soldiers from its 17,000 strong MONUC forces, by all accounts chaos has broken out in Goma, and its population is forced to flee once more. 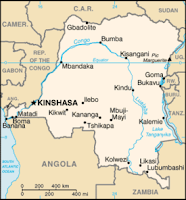 And so it's deja vu all over again; the bitter internecine tribal feuds, the hand-wringing and delays on the part of the international community, the neighboring countries all too eager to get involved in return for their share of mineral wealth, and the suffering of the residents of the region, particularly the women and girls, who have been sexually assaulted by all comers including UN troops. The crisis highlights the impotence of international law in controlling, accounting for, and preventing such atrocities; the law is simply overwhelmed by the short-term self-interest of all of the power players involved. (map credit)
How can we put an end to the vicious cycles of violence that have plagued the Eastern Congo for nearly fifteen years? Can we possibly put this Humpty back together again? In an ideal world, we would seek a solution both more local and more global than those we've seen thus far (posted about here and here and discussed in IntLawGrrl Elena Baylis' excellent article here); more local in that it would be rooted in relevant moral authority and speak to all sides in the conflict and more global in that it would recognize the culpability of all players -- including other nations -- in creating and perpetuating the violence in the Eastern Congo. But all the king's horses and all the king's men have a long way to go before we can even begin to think about post-conflict justice for Goma.
by Jaya Ramji-Nogales at 7:00 AM