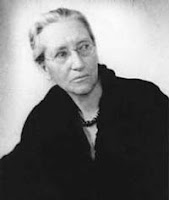 A few words about Emily Greene Balch (left), whom today's guest blogger, Chimène Keitner, has chosen to honor:
Born in 1867, Balch was a member of the 1st class to graduate from Bryn Mawr College; thereafter she studied sociology and economics in Europe and, eventually, back in the United States. She started teaching at Wellesley College in 1896, and became a Professor there 15 years later. During this time she was active in movements for women's suffrage, racial justice, and fair treatment of immigrants.
When World War I broke out in 1914, she found her life's calling; that is, "furthering humanity's effort to rid the world of war." Among many other activities, Balch:
► took part in the 1915 International Congress of Women at The Hague;
► helped to found what's now known as the Women's International League for Peace and Freedom;
► collaborated with Jane Addams and others on Women at The Hague: The International Congress of Women and Its Results (1915); and
► participated in the work of the League of Nations that was formed in the wake of World War I.
(credit for photo below right of American delegation to the 1915 Hague Conference; Balch is standing at far left in the 3d row from the front, while Addams is sitting 2d from left in the front row)
By the time that Balch was named a Nobel Peace Prizewinner in 1946, she had altered "her strong pacifistic views" somewhat on account of the "the excesses of nazism." She came "to defend the 'fundamental human rights, sword in hand'" in World War II, even as she "concentrated on generating ideas for the peace, most of them characterized by the common denominator of internationalism." Today Balch, 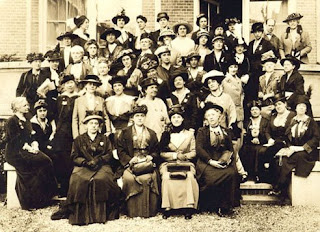 who died in 1961 at the age of 94 years + 1 day, joins Addams -- her friend and a 1931 Peace Prizewinner -- and other distinguished women on IntLawGrrls' transnational foremothers list at right, just below our "visiting from ..." map in our righthand column.
by Diane Marie Amann at 6:01 AM