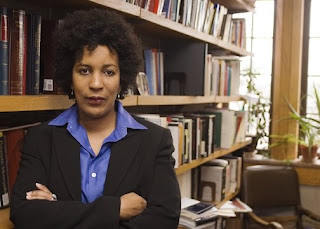 It's IntLawGrrls' great pleasure today to welcome guest blogger Jeannine Bell (left).
Jeannine is Professor of Law and Charles Whistler Faculty Fellow at Indiana University School of Law in Bloomington. (As blogreaders know, the law school also is the home institution of IntLawGrrl Christiana Ochoa and guests/alumnae Hannah Buxbaum and Dawn Johnsen.)
After earning her A.B. degree in government from Harvard College, Jeannine earned a J.D., as well as an M.A. and Ph.D. in Political Science, from the University of Michigan. At Indiana she teaches Criminal Procedure, Property, and seminars on the First Amendment and Law and Society. She's active in the Law and Society Association (about which IntLawGrrls also posts today): in addition to having served on the LSA board and chaired several LSA committees, she's an associate editor of the Law and Society Review. Her publications, which have focused on matters of criminal justice, include Policing Hatred (2004), Police and Police and Policing Law (2006), and, with Martha S. Feldman and Michele Berger, Gaining Access (2003). In her guest post below, Jeannine describes her article on torture, which grew out of questions that arose when she served as a member of a political science special task force on terror and political conflict.
Jeannine would like to dedicate her post to a woman about whom IntLawGrrls has posted before: the activist Fannie Lou Hamer (1917-1977, in the foreground of the photo below). Jeannine writes: "Though largely known for her work on behalf of civil rights in Mississippi, Hamer was also an outspoken critic of the war in Vietnam. Rather that just fighting for the rights of Blacks from Mississippi, Hamer used her voice to call attention to 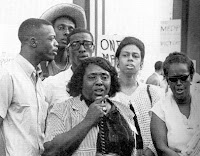 injustice outside the U.S. Her fearlessness, courage, and refusal to accept the place to which society relegated her is truly inspiring." Today Hamer joins the list of IntLawGrrls' transnational foremothers, just below the "visiting from..." map in the righthand column.
Heartfelt welcome!
by Diane Marie Amann at 2:04 AM