This is the one I've been waiting for.
That phrase kept going through my head yesterday as I cast my ballot in the general election.
Yes, yesterday.
Though the media often refer to the November 4 election, in many states voting's been under way for a week or more. 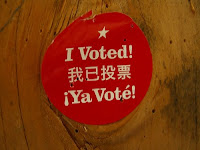 And so my husband, son, and I traveled to the Oakland basement office of the Alameda County Registrar of Voters yesterday afternoon. It was near closing time on a quasi-holiday (Columbus Day, which morphed into Indigenous Peoples Day out here, before schools quelled the debate, about which IntLawGrrls just posted, by giving children off on account of a "teachers' in-service day"). Nonetheless, in the time we were there, more than half a dozen others showed up to cast their votes.
Most touching were the older folks. Eyes adance, their smiles said they could

not wait another 22 days to try to make history. Nor could we.
Loyal blogreaders will know that I voted for Sen. Barack Obama for President, and No on Proposition 8. Oh, and No on Proposition 4, the parental-notification initiative about which I commented in yesterday's Sacramento Bee.
Now's your turn to register your preferences. For voting details -- registration deadlines, early and absentee voting,

pollwatching (a public service that early voting frees you to do) -- contact your own county Registrar of Voters or Secretary of State. Or check out websites like these: the League of Women Voters. Rock the Vote. Vote for Change.
by Diane Marie Amann at 6:03 AM