Most readers likely remember the horrific stories of stinking waste dumped from a cargo ship in Abidjan in August 2006, a stunning example of what's been termed "toxic waste colonialism." The toxic sludge, which killed 17 and caused over 100,000 Ivorians to seek medical treatment, was dumped from the Probo Koala, a Panamanian-registered cargo ship operated by Trafigura, a British and Dutch multinational corporation. Trafigura had hired Compagnie Tommy, run by a Nigerian national, to dump almost 20,000 cubic feet of gasoline residues, sulphur, and caustic soda in Abidjan after it had failed to agree on deals to get the waste properly treated in the Netherlands or Nigeria. The contract was awarded to Tommy by Puma Energy, an Ivoirian company in which Trafigura and members of President Laurent

Gbagbo's family held shares. On Wednesday, an Ivorian court sentenced the head of Tommy to 20 years in prison and sentenced a shipping agent at the Port of Abidjan who had recommended Tommy to Trafigura to 5 years. Noticeably absent were sentences for those responsible at Puma Energy -- the head of the company, who was supposed to be a witness, left the country several days before the trial -- and at Trafigura, whose executives were freed last year after it settled with the Ivorian government for over $200 million, but maintains that its "slops" did not cause the illnesses suffered by Abidjan's residents.
This failure of accountability underscores the need for expanded international jurisdiction over corporations such as Trafigura, whose prior misdeeds include violating the embargo provisions of the UN "Oil for Food" program in Iraq. To be sure, this is just the first battle in a longer war -- the Dutch P 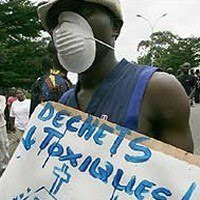 ublic Prosecutor has charged Trafigura in connection with its stay in Amsterdam before steaming to Abidjan and Leigh Day and Co., a British law firm working with Greenpeace, has instituted a class action lawsuit against Trafigura on behalf of those injured by the toxic waste. Moreover, the UN Special Rapporteur on the adverse effects of the illicit movement and dumping of toxic and dangerous products and wastes on the enjoyment of human rights (try saying that 10 times quickly!) has visited Cote d'Ivoire and called on the international community to assist in clean-up efforts. But the Special Rapporteur's website illustrates exactly the problem with international law's vision of the world -- it focuses on the obligations of States to monitor the disposal of hazardous wastes and the Basel Convention on the Control of Transboundary Movements of Hazardous Wastes and their Disposal (to which all the nations involved are parties), rather than on the corporations responsible for the harm. Those corporations, of course, haven't signed any treaties, and are thus able to hide in the shadows of international law, cuddling their Probo Koalas while decimating the lives of hundreds of thousands of victims who can seek recompense only in weak national courts or the corporations' home courts.
by Jaya Ramji-Nogales at 7:00 AM