'They are so happy, and they just outpour their happiness to us.'

-- Maria Garcia
These comments by 2 local government employees are just 2 of many to be heard and seen in a new half-hour online video on marriage in San Francisco.
The city-produced video tells of this spring's state supreme court ruling that California's 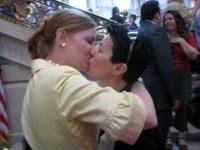 Constitution authorizes marriage regardless of spouses' sex, about which various IntLawGrrls have posted here and here and here and here. It shows too the weddings that ensued this summer. (photo at right © Kathleen Doty) And it recalls the flurry of February 2004 marriages. Later annulled, those weddings put a marker on the litigation that would follow. Interviewed are the city officials involved -- among them Mayor Gavin Newsom, County Clerk Director Karen Hong Yee, and, at 15:30 and again at 20:56, my cousin Lynn Bruni, one of the hundreds of San Francisco employees who volunteered to serve as marriage commissioners. It shows as well, of course, couples who've wed -- some, now, twice.

Worth watching as Californians await the opportunity in November's election to Vote No on Prop 8, the ballot initiative that aims to pull back on the liberty and equality now recognized in the state's Constitution.
by Diane Marie Amann at 6:03 AM