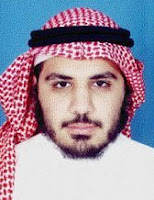 'I will continue to do what I can to help this individual maintain his sanity, but in my opinion we're working with borrowed time.'

-- "an unidentified Navy brig official," in a military communication just disclosed pursuant to Freedom of Information Act litigation. The quote appears in a 2002 military communication regarding Yaser Esam Hamdi (left), a U.S.-born man in his early 20s, who'd been captured in late 2001 during the counterassault in Afghanistan. Hamdi would remain in incommunicado "enemy combatant" detention for years more, until the Supreme Court's decision in Hamdi v. Rumsfeld (2004) set in motion events that led to his release and return to his home in Saudi Arabia.