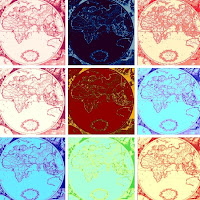 (On Art! is the name just bestowed on IntLawGrrls' occasional looks at artifacts of transnational culture) Now on display at Selfridges Ultralounge, London: "Woman on the Run," an installation that uses TV newsreaders and mind-tickling neons -- "Passion," "Don't Go Inn,"etc. -- to pique interest in a film noir femme fatale in flight. As noted in the description beside the project's YouTube video (below):

A crime has taken place, and she is wanted for questioning. Clues are given about what might have happened and who the woman is; it is for the viewer to decide whether she the victim, or the perpetrator; a study in feminism or the manifestation of outdated perceptions of women?

One mystery solved: la femme inconnue is played in tandem. Starring is the installation's creator, Tracey Snelling, a California-born artist who's exhibited across America and Europe, in Israel and in China; joining her is the Dublin-based actor and playwright Kate Perry.
by Diane Marie Amann at 6:02 AM