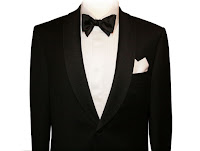 ... 1886, it is said, the tailless black and white costume that looks well on most anyone made its American début at a ball in the posh New York resort town of Tuxedo Park. The birth of the tuxedo is given a delightfully spurious consequences in this parody blog:

... 2008 (today), is marked World Mental Health Day. It's a day set aside to confront widespread global reluctance to acknowledge, prevent, and treat disorders of the mind. Such disorders themselves are widespread, according to the World Health Organization, whose

statistics for 2002 show that 154 million people globally suffer from depression, only one form of mental illness.
Mental, neurological and behavioural disorders are common in all countries around the world, causing immense suffering and staggering economic and social costs. People with disorders are often subjected to social isolation, poor quality of life and higher death rates.

Among the NGOs devoted to the education effort is the 60-year-old World Federation for Mental Health (logo above right).
by Diane Marie Amann at 6:01 AM