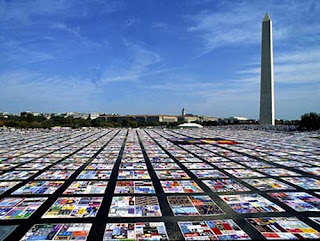 ... 1987, the AIDS Quilt was unrolled for the 1st time on the National Mall in Washington, D.C. (right). It was a key feature of the National March on Washington in favor of LGBT rights and against the decision in Bowers v. Hardwick (1986) (holding 5-4 that the Constitution's Due Process Clause did not protect individuals from criminal prosecution for same-sex intimacy), overruled by Lawrence v. Texas (2003). The Quilt, which "covered a space larger than a football field and included 1,920 panels," was seen by 500,000 persons that weekend. (photo credit) 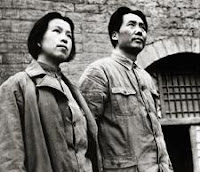 ... 1976, the new chairman of China's Communist Party signaled an end to that country's Cultural Revolution when he ordered the arrest in Beijing of the so-called "Gang of Four," who had been influential in spurring Mao Zedong to declared the upheaval 10 years earlier. The 4 were convicted 4 years later of attempting to overthrow the government; they received death sentences that later were commuted to imprisonment. Among the 4 was was Mao's widow, known as Jian Qing. A drama school graduate, the woman who'd been given the birth name Li 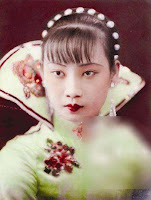 Shumeng was pursuing a career in theater when Japan invaded China. That event led her to quit the stage and begin working against Japan and for the Communist Party -- work that led to her meet the Party's leader, Mao. Jiang Quing died at age 77 in 1991, soon after her release from her post-Cultural Revolution imprisonment. (credit for 1947 photo above left of Jiang and Mao; credit for circa 1930s photo at right of Jiang, then using the stage name Lan Ping)
by Diane Marie Amann at 12:00 AM