On this day in ...
... 1943 (65 years ago today), by notice given to an ambassador in Madrid, Spain, years after it had helped to form the Axis Powers in World War II, Italy reversed course and declared war on Nazi Germany. The New York Times commented:

Thus the defeated nation led into war by Benito Mussolini re-entered it against its former ally through a curt diplomatic exchange in the capital of the country in which they had first collaborated on a military basis seven years ago.

(credit for image of 1943-45 war flag of the Italian Socialist Republic)
... 1705, a textile mill was opened in Montréal (below left; map credit), in the French colony of Québec, by 48-year-old Agathe de Saint-Père. Orphaned at age 15 -- many of the men in her family having been killed in clashes with the indigenous Iroquois -- Saint-Père took on the task of caring for her 10 siblings and half-siblings. Her textile career began early, as she installed weaving looms in houses, and her career continued even after her marriage at age 28. On 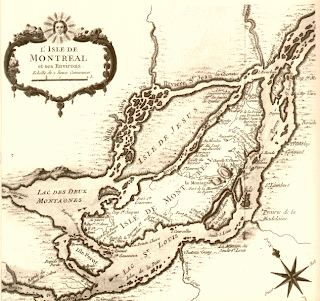 matters of business she

outsh[o]ne her husband frequently. She signed contracts, made profits on fur-trading licences, bought and sold land, made loans, and settled her accounts as well as the debts of her husband and brother-in-law.

After retirement Saint-Père devoted herself to work at a Québec hospital. She is believed to have died about 1747; her last will and testament, in French, is here.