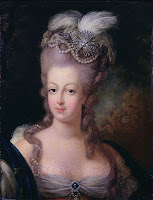 On this day in ...
... 1793 (215 years ago today), the Austrian-born, 37-year-old, former Queen of France, Marie Antoinette, was guillotined in the midst of the French Revolution. Marie (right) had been imprisoned for more than a year; her husband, the deposed Louis XVI, had been executed 10 months earlier. The former queen's execution followed by 2 days her trial for a variety of charges, among them treason and sexual abuse of her son, who had been heir to the throne.
... 1998 (10 years ago today), British authorities acting upon an international warrant issued by Spain arrested former Chilean dictator Gen. Augusto Pinochet, who was in Britain for medical treatment. The arrest touched off years of litigation, which ended

with Pinochet's return to Chile -- where he found himself the subject of criminal and civil suits, arising out of the brutality of his regime, until his death in 2006. (image credit)