On this day in ...
... 1908 (100 years ago today), a treaty was concluded by which Belgium annexed the Congo Free State. Within a month the Belgian Parliament passed a law authorizing colonial administration. The ensuing century roiled the 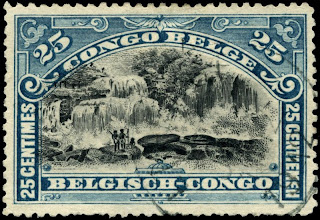 central African state, which still struggles to govern itself. Excellent accounts of the era depicted in the 1910 postage stamp at right may be found in fiction -- for example, Barbara Kingsolver's Poisonwood Bible (1998) -- and nonfiction -- Adam Hochschild's King Leopold's Ghost (1998) -- alike.
... 1978 (30 years ago today), President Jimmy Carter ordered U.S. production of some parts of the neutron bomb, "reserving judgement on assembly or deployment." A news video of the White House announcement is available here.