On this day in ...
... 1943 (65 years ago today), Camille Claudel (right) died at age 78 in the mental hospital asylum at Montfavet, France, to which she had been committed 30 years earlier. Born in Fère-en-Tardenois, Aisne, France, Claudel and her family moved to Paris when she was a teenager. She became a student of sculpture at 1 of the few academies that admitted women. Eventually she met the already- 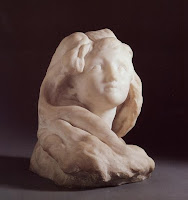 famous-and-middle-aged sculptor Auguste Rodin, and became both his studio assistant and mistress. Claudel is responsible not only for contributing to works for which he is given credit, but also for works of her own, such as that at left, that are among this IntLawGrrl's favorite creations in marble or metal. Many of her works cannot be seen: as depicted in a 1988 film, Claudel destroyed them as she succumbed to mental illness.

... 1987, the Dow Jones plunged 500 points, more than any time since the crash of 1929 that was known as "Black Monday." Within a week, commentators were causing the '87 crash "Black Monday" as well, and asserting that 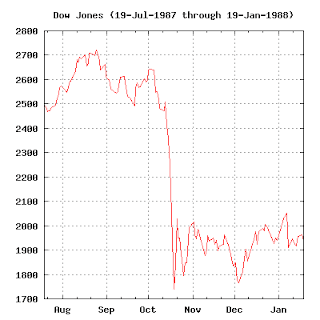 Wall Street will be different after Black Monday. Along with employment cuts, salaries will fall -- starting with this year's bonuses. Investment banks may be slower to push into riskier businesses, like merchant banking. Firms may pull back -- voluntarily or not -- from such derivative products as portfolio insurance and program trading. And many firms may restrict their capital to fewer and safer lines of business.