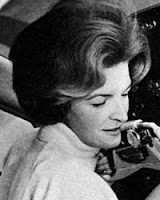 On this day in ...
... 1988 (20 years ago today), aviator Sheila Scott (left) died 61 years after she'd been born in Worcestershire, England. Scott made history when, in the course of a 34,000-mile flight in 1971, she became the 1st pilot -- woman or man -- "to fly directly over true North Pole in a light aircraft." During this flight the U. S. Navy, which tracked her via satellite, "had orders: 'Don't lose Sheila!'"
... 2003 (5 years ago today), the U.N. General Assembly (below left) passed a resolution condemning what the resolution called "Illegal Israeli actions in Occupied East Jerusalem and the rest of the Occupied Palestinian Territory." The action to which the resolution referred was the building of a wall

dividing territory. The resolution asked for an advisory opinion on the legality vel non of this act; consequently, the International Court of Justice ruled in mid-2004 that the building of the wall was contrary to international law. (photo credit)