On this day in ...
.. 1953 (55 years ago today), at the French Ministry of Foreign Affairs at the Quai d'Orsay in Paris, King Sisavang Vong signed the Traité d’Amitié et d’Association entre le Laos et la France, by which a former French colony in Indochina, Laos, gained its independence. The transfer did not abate anti-royalist resistance nor, eventually, civil war in the country (flag above left). 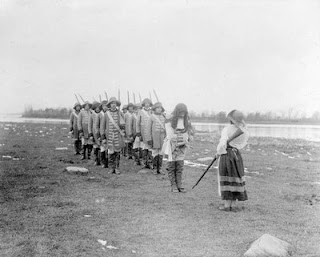 ... 1692, when indigenous Iroquois fighters attacked her settler-family's homestead along the St. Lawrence River in what is now Canada, 14-year-old Madeleine de Verchères "led the defence in a fort in New France until reinforcements came to her aid." She "later gained recognition as a famous heroine for her courageous action in the battle, thanks in part to her own self-promotion." An example of her successful efforts is the eponymous 1922 film about her life, depicted above right. (photo credit)
by Diane Marie Amann at 6:01 AM