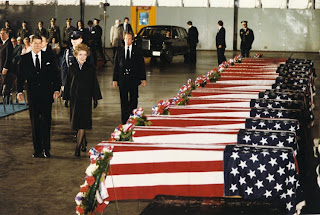 ... 1983 (25 years ago today), in the midst of civil war in Lebanon, bombs in Beirut devastated barracks of American and French armed forces, killing 241 American servicemembers, nearly all of them Marines, and 58 parachutistes. Although President Ronald Reagan "insist[ed] Marines will remain," the United States withdrew all troops from the country within months. (credit for photo of the President and 1st Lady Nancy Reagan reviewing caskets of U.S. troops who died in the bombing)

... 1989, in 1 country that had led movements in Eastern Europe away from the Warsaw Pact and toward market economies, Hungary became a republic by proclamation of

interim President Mátyás Szűrös. The declaration came on the 33d anniversary of the unsuccessful uprising against Soviet control. Free elections would be held the following year. Hungary (flag at left) became a member of NATO in 1999 and of the European Union in 2004.
by Diane Marie Amann at 6:01 AM