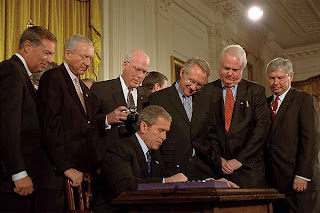 ... 2001, as congressional leaders looked on, Pub. L. 107-56 was signed into law by U.S. President George W. Bush. Formally titled "Uniting and Strengthening America by Providing Appropriate Tools Required to Intercept and Obstruct Terrorism," this USA PATRIOT Act included the easing of surveillance and hundreds of pages of other measures adopted in near-immediate response to the September 11, 2001, terrorist attacks in New York and Washington. 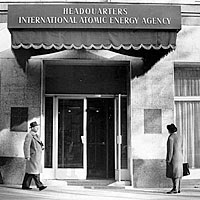 ... 1956, the Statute of the International Atomic Energy Agency was opened for signature "by all States Members of the United Nations or of any of the specialized agencies." That same month "81 nations unanimously approved" the founding instrument of the IAEA, set up a year later in the temporary headquarters at right. The Vienna-based agency now has 145 member states.