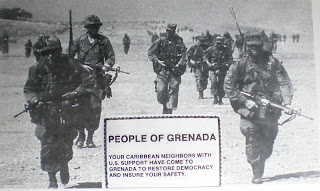 On this day in ...
... 1983 (25 years ago today), the United States vetoed a U.N. Security Council resolution "'deeply deploring' ... as a 'flagrant violation of international law,'" the invasion that the United States had led into Grenada. The United States -- which had intervened militarily after the previous week's coup in the Caribbean island state -- stood alone in opposition to the resolution. The 11 countries voting in favor included U.S. allies France, the Netherlands, and Pakistan; among the 3 abstainers was another U.S. ally, Britain. (credit for photo of leaflet dropped during U.S. intervention) 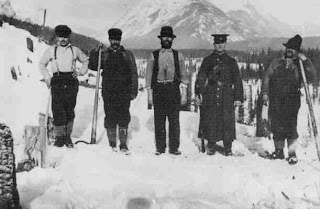 ... 1914, having entered the 1st World War being fought in Europe, Canada announced wartime measures at home. Thus Canada's "War Cabinet order[ed] the registration of all 'alien enemies,'" and further "provide[d] for establishment of 'concentration camps' to house internees and their families in exchange for work such as clearing bush and cutting lumber in the national parks." The measures had grave effects on recent immigrants to Canada. (credit for 1916 photo of internees at work camp, Otter Creek, British Columbia)
by Diane Marie Amann at 6:01 AM