On this day in ...
... 1863 (145 years ago today), in Switzerland, a committee set up by the Geneva Public Welfare Society to work to implement Henry Dunant's proposals for alleviating some of the suffering in armed conflict (see prior post) concluded a 4-day conference of states,

organizations, and individuals. The meeting ended with adoption of the Resolutions of the Geneva International Conference, calling for national relief bodies organized under the auspices of what would become the International Committee of the Red Cross.
... 1938 (70 years ago today), in Barcelona, Spain, Dolores Ibárruri, the Communist Party activist whose nom de guerre was La Pasionaria, gave a resounding farewell to the International Brigades, the non-Spaniards who had fought fascism during the Spanish Civil War and now were retreating by order of a commission that expelled all foreign fighters. (Note: Various sites give various dates in this same week for these events.) Now an artifact on a website entitled "Modern American Poetry," Ibárruri's speech included these words: 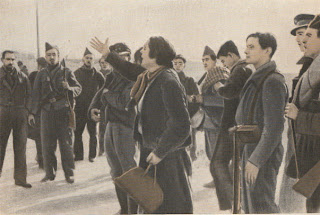 Mothers! Women! When the years pass by and the wounds of war are stanched; when the memory of the sad and bloody days dissipates in a present of liberty, of peace and of well­being; when the rancors have died out and pride in a free country is felt equally by all Spaniards, speak to your children. Tell them of these men of the International Brigades.

(credit for photo of La Pasionaria rallying troops in Madrid)