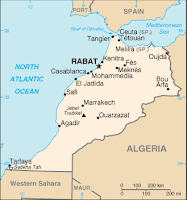 On this day in ...
... 1904, the Declaration Between the Governments of France and Spain, Respecting the Integrity of Morocco was signed in Paris. In it the 2 European governments "[d]eclare[d] that they remain firmly committed to the integrity of the Moroccan Empire under the sovereignty of the Sultan." Germany would test this promise of Morocco's independence the following year. (credit for contemporary map of Morocco)
... 1858 (150 years ago today), Eleanora Duse (below right), "considered by many to be one of the most gifted actresses of her time," was born Vigevano, Italy. Her family were actors; she herself 1st appeared on stage at age 4, and received acclaim for a lead performance age 20. La Duse, as she came to be known, was a rival of Sarah Bernhardt and a favorite of George Bernard Shaw. Duse founded a theater company and toured Europe and the Americas; she died on tour in 1924, in Pittsburgh, Pennsylvania. Among her famous quotes:

To save the theatre, the theatre must be destroyed, the actors and actresses must all die of the plague. They poison the air, they make art impossible. It is not drama that they play, but pieces for the theatre. We should return to the Greek, play in the open air; the drama dies of stalls and boxes and evening dress, and people who come to digest dinner.

Duse is commemorated in a floor tile in Judy Chicago's The Dinner Party.
by Diane Marie Amann at 12:05 AM