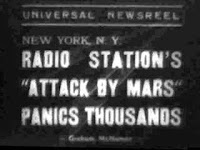 On this day in ...
... 1938 (70 years ago today), on the eve of Hallows Eve, Americans were thunderstruck by CBS' nationwide announcement that Martians had landed "in giant machines with metal legs" and "destroyed everything in their path with a heat ray." Within minutes switchboards jammed. Even before the end of Orson Welles' radio broadcast "War of the Worlds" -- adapting H.G. Wells' 1898 novel -- the Associated Press "issued a bulletin at 8:48 pm that there was no invasion from Mars," and the host of the next radio show began with these words:

'Mr. and Mrs. America, there's no cause for alarm. America has not fallen.'

... 1995, voters in the Québec province of Canada narrowly answered "No" to a secession referendum, which asked in relevant part: "Do you agree that should become sovereign, after having made a formal offer to Canada for a new ec

onomic and political partnership ....?" The razor-thin margin -- 50.56% opposed -- led to the 1998 Canada Supreme Court decision holding that Canada was respecting and ensuring the right of self-determination of the people of Québec (flag at left), so that those people had no right under law to secede from the state.
by Diane Marie Amann at 6:01 AM