... 1883 (125 years ago today), Marie Laurencin was born in Paris. Her mother sent the teenaged Marie to Sèvres, home of a famed porcelain-painting factory. When she returned to Paris she entered an art academy and became acquainted with artists who would form the Cubist School, among them Georges Braque, Pablo Picasso, and Guillaume Apollinaire. Her own paintings featured "mainly lyrical motifs like graceful, dreamy young girls in pastel coloring and soft 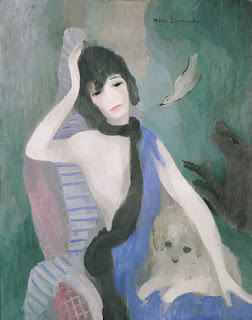 shading," a "color-sensitive inventiveness" that "leads to a variation of repetitions of form and motifs." "During World War I Laurencin took refuge in Spain where, feeling painfully exiled, she produced few works. " In addition to her paintings, Laurencin is known for designing sets for Serge Diaghilev's ballets and for illustrating a 1930 edition of Lewis Carroll's Alice in Wonderland. She died in Paris in 1956. (credit for photo of Laurencin; credit for her 1923 painting, "Portrait of Mademoiselle Chanel")

Lyndon B. Johnson announced that he was halting "all air, naval, and artillery bombardment of North Vietnam" effective the next day. Five days later, Johnson's preferred successor, his Vice President Hubert Humphrey, lost the Presidential election to Richard M. Nixon (right), the Republican who had served as President Dwight D. Eisenhower's Vice President in the previous decade. The Vietnam War continued for another 7 years.
by Diane Marie Amann at 6:00 AM