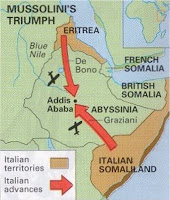 ... 1935, 4 days after troops from Benito Mussolini-led Italy "swept into Ethiopia from Eritrea and Italian Somaliland and overwhelmed the Ethiopian army," the Council of the League of Nations "declared that Italy was the aggressor nation in the Ethiopian affair and made preparations to apply sanctions against the Italians." In fact League members did nothing, however, and within a year Ethiopia (known then as Abyssinia) accepted Italian rule. "This incident was not a minor one and has been regarded by history to be one of the thorns that led to the outbreak of World War II." (map credit)
... 1955, at the Six Gallery in San Francisco's Fillmore district, a 29-year-old "unknown poet from the East Coast," Allen Ginsberg, gave the 1st public reading of "Howl." He began:

I saw the best minds of my generation destroyed by madness 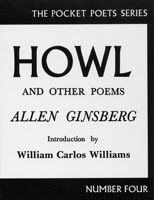 and then continued with a poetic rant (full text here) that, in the words of an NPR retrospective, "gave voice to an undercurrent of dissatisfaction and alienation in Eisenhower's America." Lawrence Ferlinghetti, whose City Lights press would publish the poem amid controversy, described the impact of this literary icon of the Beat Generation with more punch: "'Howl' knocked the sides out of things."