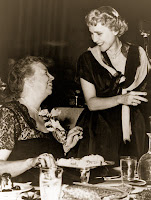 On this day in ...
... 1987, Clare Boothe Luce died from cancer. She'd been born in New York City 84 years earlier, the daughter of a businessman and a "chorus girl." She married a rich, older man, then divorced and began a journalism career that culminated in her editorship of Vanity Fair. In 1935 she married Henry R. Luce, a conservative publisher whose magazine empire included Time. After serving a couple terms in the 1940s as a Republican Member of Congress, Boothe Luce was named Ambassador to Italy -- "stirring controversy because of Mrs. Luce's Catholicism, her lack of diplomatic experience and because she was a woman" -- and, later, to Brazil. Throughout her political career Boothe Luce was a "hard-line anti-Communist." The quotable Boothe Luce is most remembered by this IntLawGrrl for her deliciously nasty play The Women (1936). (credit for photo of 1st Lady Eleanor Roosevelt and U.S. Rep. Clare Boothe Luce)
... 1988 (20 years ago today), in the capital city of Riga, Latvians launched "a mass movement to press Moscow for greater independence from the Soviet Union." Among the demands that the new Latvijas Tautas Fronte made was that of "the right to

self-determination." The Baltic country (flag at left) would declare itself independent, and be recognized as such, in 1991.
by Diane Marie Amann at 6:01 AM