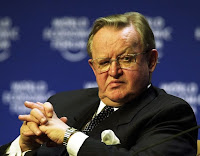 What a pleasure to see this year's Nobel Peace Prize awarded to a true peacemaker.
The winner is Martti Ahtisaari (right), the former President of Finland (1994-2000), who for years has done the hard work of diplomacy in the world's trouble spots. To name a few: Northern Ireland, where he served on the commission that secured disarmament there; Indonesia, where he negotiated peace between the government and rebels in the country's Aceh province; and, as posted here, Kosovo, which declared its independence earlier this year. At a Peace Prize press conference yesterday, Ahtisaari noted with approval that on the same day 2 states, Macedonia and Montenegro, had just recognized Kosovo 's statehood. (photo credit)
The Nobel Committee's announcement is in this Reuters video newsclip:

I regret that the much neglected language, Esperanto did not receive the Nobel Peace Prize. At least nine British MP's nominated this global language, for the Prize.

Within a short period of 121 years Esperanto is now placed within the top 100 languages, out of 6,000 worldwide according to the CIA factbook. It is the 17th most used language by Wikipedia, and it is in active use by Facebook and Skype.

Solid arguments for Esperanto can be seen on the Youtube video, by Professor Piron, a former translator at the United Nations.

If you have time please check http://www.youtube.com/watch?v=_LV9XU

IntLawGrrls posted on Esperanto at http://intlawgrrls.blogspot.com/2007/08/on-august-10.html.