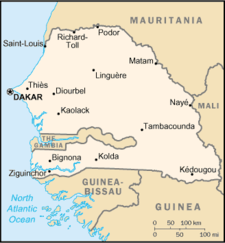 Senegal is a country with two vibrant traditions: Located on Africa's west coast, Senegal's population is ninety-five percent Muslim. But the traditions of the ancestors are an integral part of society. One way such traditions are kept alive is through art and culture. Sabar, a traditional dance and drumming technique, holds pride of place with Senegalese both as a form of expression and as a method of connecting with Senegal's rich past. It is played at weddings, christenings, as well as large family gatherings.

Not every segment of society views Sabar with pride. Since independence in 1960, some of Sabar's dance steps have been banned by various governments for being too sexually explicit. Muslim leaders have repeatedly denounced Sabar, and in the more fundamentalist regions of Senegal, the dance is simply forbidden. Sabar is under siege, but it persists.

The ban on Sabar also has gendered implications. Whenever the explosive combination of sex and religion meet, women always seem to find themselves in harms way. Recently, a famous female traditional dancer was tried and condemned for dancing the Sabar (the presiding judge was also a woman.)

Thankfully, with the advent of 21st century technology--and yes, globalization--the Senegalese are able to share the rich cultural heritage of Sabar with the world. Attached below is a short YouTube clip detailing the dance steps (for the prurient among us, the "objectionable" steps begin at 2:39!)]. The second clip is a short and excellent documentary exploring gender issues, Islam, and the Sabar in Senegal.


The Forbidden Steps of the Sabar:


Sabar and Women: A Documentary


Heart felt thank you to IntLawGrrl guest/alumna Fatou Kiné Camara for information on this important issue!
by Marjorie Florestal at 9:28 AM