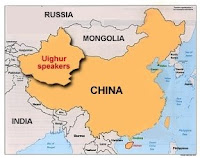 ... into the United States.
It's the 1st time ever for such a ruling. It concerns the 17 Guantánamo detainees who are Uighurs. The United States has conceded that they are not "enemy combatants"; even so, as we posted a year and a half ago, they cannot be returned to their home in northwest China because of the likelihood that they'll be persecuted there. (Human rights groups charge that China has conducted "a 'crushing campaign of religious repression' against this Muslim people.) (map credit)
Here's a taste of the reasoning that led the Honorable Ricardo M. Urbina (below) of the U.S. District Court for the District of Columbia to his decision, which the U.S. government appealed within hours:

At a hearing packed with Uighurs who live in the Washington area, Urbina rejected

government arguments that he had no authority to order the men's release. He said he had such authority because the men were being held indefinitely and it was the only remedy available. ...
Urbina said in court that he ordered the release 'because the Constitution prohibits indefinite detention without cause.' He added, 'The separation of powers do not trump' the prohibition against holding people indefinitely without trial.

More details here, here, and here.
by Diane Marie Amann at 6:02 AM

E.g. Does that mean that the case of Miranda v Arizona would now also find application? Read my blog at on this at: http://lorenzo-wakefield.blogspot.com/2008/07/of-self-incrimination-by-way-of-torture.html In Miranda the court found that: "statements obtained during custodial interrogation of the accused may not be admitted into evidence unless the prosecution can show that appropriate safeguards were used to secure the privilege against self-incrimination. The appropriate procedural safeguards are that a person must be warned that she has the right to remain silent, that any statements she makes may be used against her, and that she has a right to the presence of an attorney."

If the USA Constitution would apply to Gitmo detainees, then surely the interpretation of the right against self-incrimination (as in the Miranda case) would also find application.

What a big, legal mess Guantanamo Bay has turned into.