Overlooked in news about this month's election of judges: It appears that as of February 6, 2009, the International Court of Justice will revert to a men-only bench.
The only woman ever to have served on the 42- 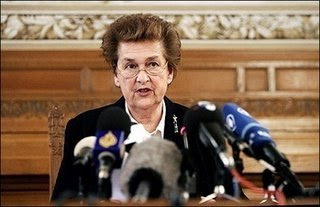 year-old World Court is its current President, Rosalyn Higgins (left) of the United Kingdom, named a Dame Commander of the British Empire in 1995. Her term's up in February, and her compatriot, our colleague Christopher Greenwood, was among the 4 just chosen to fill upcoming vacancies. All 4 -- like all others who have served on the Court -- are men.
Women have served in sizable numbers on most of the international tribunals of the last couple decades. To name a very few:
► Gabrielle Kirk McDonald, onetime President of the International Criminal Tribunal for the former Yugoslavia who's now on the Iran-U.S. Claims Tribunal;
► Navanethem Pillay, formerly President of the the International Criminal Tribunal for Rwanda and now U.N. High Commissioner for Human Rights;
► Akua Kuenyehia, currently 1st Vice President at the International Criminal Court; and
► Patricia Wald, formerly an ICTY judge and Chief Judge of the U.S. Court of Appeals for the District of Columbia Circuit, and now co-chair of a high-level ICC Task Force just launched by the American Society of International Law (see p. 1 of link).
In short, the absence of women international judges -- decried in Hilary Charlesworth, Christine Chinkin, & Shelley Wright, Feminist Approaches to International Law, 85 American Journal of International Law 613 (1991) -- is, increasingly, an aberration unique to the ICJ.