This morning I woke with feelings of both joy and despair. Last night our President-elect Obama addressed the nation: 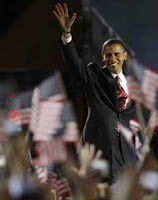 If there is anyone out there who still doubts that America is a place where all things are possible; who still wonders if the dream of our founders is alive in our time; who still questions the power of our democracy, tonight is your answer.

(Credit for photo of Obama, left).

Sadly, it was my answer. It indeed showed me that anything is possible in this country. While in the same moment this country can leave behind hundreds of years of racism and discrimination against African Americans and elect a man of mixed race to the presidency – it can also vote to change numerous state constitutions to ban gay and lesbian couples from marriage and the ability to adopt a child. It also told me that while the former was possible, it took 143 years after the passage of the 13th Amendment to get it done. So even though “yes we can” was the motto last night, the question for the gay community is when can we see positive change?
In California, Prop 8 passed, banning gay marriage after the California Supreme Court

ruled that the denial of the right to marry violated the state constitution. (See my prior post on the Supreme Court ruling here). With 96% of precincts reporting at this time, only 420,000 votes made the difference. While the No on 8 leadership believes that there are 3 to 4 million provisional and vote-by-mail ballots yet to be counted, the measure’s proponents have already declared victory. (Photo, left, available here).
Even if the miracle occurs and the provisional and absentee ballots tip the scales on Prop 8 in the coming days, the question remaining to me is whether this process is the one that the founders imagined - that a state court could rule on a constitutional question and be reversed by a popular vote. In California, the state constitution provides in Article 2, Section 1:

All political power is inherent in the people.
Government is instituted for their protection, security, and benefit, and they have the right to alter or reform it when the public good may require.

Thus, although the state constitution requires a 2/3 majority of both houses in order to make a constitutional change, an initiative to change the constitution by popular vote requires only a simple majority.
This morning, I can take no comfort in this system. A government that allows a bare majority of my neighbors to determine the extent of my rights as a citizen without limitation is not one that I stand behind. I want a constitutional process that establishes a floor that we can vote to expand upon, rather than a ceiling that we can vote to lower. While yesterday my personhood was fully recognized by the state, today, I am some fraction of a citizen.
But I cannot give up hope.
Through my tears, I see that a nation that can elect Barack Obama to the presidency can indeed make change. A legal challenge to Prop 8 is already underway, and it is my hope that reform of California’s (and many other states’) ballot initiative process will be forthcoming.
I just don’t want to wait until Obama’s little girls reach 106.

Thanks Kathleen for putting words to the "uneasy feeling in my belly" I've been dealing with all day. I'm awed and amazed at Obama's win. I'm appalled and truly saddened at the passage of Prop 8. What my country has given with one hand, my state has taken away with another. The very idea that a numerical majority can take away the fundamental rights of a minority group is so extremely offensive I can't even find the words. As an African American lesbian woman, I really wonder exactly when will all parts of me be deemed "acceptable" by the majority?