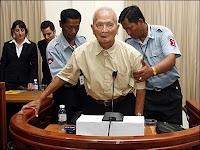 My thanks to IntLawGrrls for inviting me to contribute this guest post, another in the Khmer Rouge Accountability series.
The Co-Investigative Judges of the Extraordinary Chambers in the Courts of Cambodia recently found that there were well founded reasons to believe that Nuon Chea committed crimes against humanity and war crimes and ordered his provisional detention “for a period not exceeding one year.” the Judges then extended Nuon’s detention for an additional year. Nuon (above right), also known as "Brother Number Two," is appealing the order. (credit for Reuters photo by Chor Sokunthea)
ECCC Internal Rule 63 allows persons charged with crimes against humanity and war crimes to be detained provisionally for an initial one-year period, which can be extended a maximum of two times. Therefore, if the required conditions continue to be met, Nuon can be held in detention before being formally indicted until no later than September 2010. The ECCC Internal Rules require provisional detention orders to set out the legal grounds and factual basis for a Charged Person’s detention. Rule 63(3) provides that the Co-Investigating Judges must have a well founded belief that a detainee committed the crimes with which he or she is charged, and must find detention to be a necessary measure to:
► prevent the Charged Person from exerting pressure on any witnesses or Victims, or prevent any collusion between the Charged Person and accomplices of crimes falling within the jurisdiction of the ECCC;
► preserve evidence or prevent the destruction of any evidence;
► ensure the presence of the Charged Person during the proceedings;
► protect the security of the Charged Person; or
► preserve public order.
In the order extending Nuon’s detention, the Judges said that 23 new statements by Charged Person Kaing Guek Eav, aka Duch, regarding Nuon’s role in S-21 provide additional support for their well founded belief that he committed the 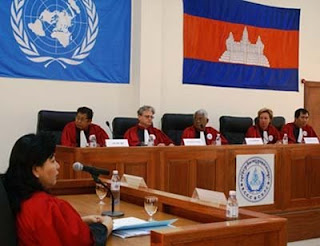 charged crimes. They did not discuss the other five conditions; rather, referring to the body pictured at left, they wrote that “the reasons of the Pre-Trial Chamber in its Decision of 20 March 2008 remain valid.”
Internal Rule 63(7) requires the CIJs to provide written reasons for extending detention. The International Criminal Tribunal for the Former Yugoslavia has emphasized that review of detention is legally necessary so that a Chamber “can assure itself that the reasons justifying detention remain.” Prosecutor v. Mucic et al., Case No. IT-96-21, Decision on Motion for Provisional Release Filed by the Accused Zejnil Delalic, ¶ 24 (Trial Chamber, 25 Sept. 1996). This is more important the longer a Charged Person is held pre-trial. For example, the Inter-American Commission on Human Rights has found that “[t]he effectiveness of legal guarantees should be heightened in direct proportion to the growing length of time spent in preventative detention.” Bronstein et al. v. Argentina, Report No. 2/97, ¶ 19, Inter-Am. C.H.R, OEA/Ser.L/V/II/95 Doc. 7 rev. at 241 (1997).
The jurisprudence of human rights bodies such as the Inter-American Commission, European Court for Human Rights, and Human Rights Committee disfavors pre-trial detention and places the burden on States to justify continued detention. See, e.g., Ilijkov v. Bulgaria, App. No. 33977/96, Eur. Ct. HR, ¶¶ 84, 85 (2001). In contrast, international and hybrid criminal courts have treated pre-trial release as the exception and in practice have placed the burden on the defense to show that release is warranted. See, e.g., Prosecutor v. Fatmir Limaj et al., Case No. IT-03-66-AR65, Decision on Fatimir Limaj’s Request for Provisional Release, ¶ 40 (Appeals Chamber, 31 Oct. 2003).
Notably, neither the Special Court for Sierra Leone nor the International Criminal Tribunal for Rwanda has ever granted any accused pre-trial release. These courts have justified their more restrictive approach in part by highlighting the severity of the crimes they prosecute. See, e.g., Prosecutor v. Issay Hassan Sesay et al., Case No. SCSL 2004-15-PT, Decision on Application of Issa Sesay for Provisional Release, ¶ 40 (Trial Chamber, 31 March 2004).
Despite their different starting points, both human rights bodies and international/hybrid courts take a somewhat similar methodological approach to determining whether the factors justifying detention have been met. They look at each situation on a case-by-case basis and balance factors, including those referenced in Internal Rule 63(3). Human rights bodies have generally required that the factors justifying detention be discussed in a “clear and specific” and not “stereotyped” manner. Letellier v. France, App. No. 12369/86, Eur. Ct. HR, ¶ 52 (1991). On the other hand, international and hybrid criminal courts have tended to accept more generalized justifications for detention.
In short, these sources suggest that in extending Nuon’s detention the Co-Investigating Judges had an obligation to address how the five conditions in Rule 63 continue to be met, at least in a general way, and not merely to refer to the decision of the Pre-Trial Chamber. Nevertheless, following international and hybrid court practice, the Pre-Trial Chamber will likely determine that the burden is on Nuon to convince it why his detention is no longer justified.