JCE before the ECCC 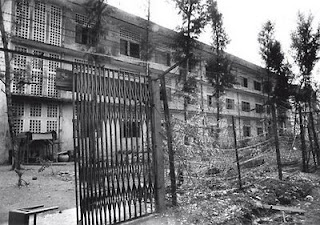 As we’ve blogged before, the August 8, 2008 Closing Order (Indictment) filed before the Extraordinary Chambers in the Courts of Cambodia (ECCC) (its first) with respect to defendant Duch. Duch, who ran the detention, interrogation and execution camp S-21, a.k.a. Tuol Sleng (above) (photo credit), has been indicted for crimes against humanity (imprisonment, enslavement, torture, rape, murder, extermination, persecution, other inhumane acts) and war crimes (unlawful confinement, depriving rights to a fair trial, wilfully causing great suffering, torture and inhumane treatment, willful killing). In terms of the

applicable forms of responsibility, Duch (left) is alleged to have committed, ordered, planned, instigated, aided, and abetted the crimes in question. In addition, he has been indicted under the doctrine of superior responsibility by virtue of the fact that he exercised effective command and control over the staff of S-21. The Closing Order limits his “commission” of crimes to those incidents in which Duch “personally tortured or mistreated detainees.”

The Co-Prosecutors have appealed the Closing Order, arguing inter alia that Duch should also have been indicted for his participation in crimes pursuant to a joint criminal enterprise (JCE). The ECCC Law does not specifically mention the availability of JCE as a form of commission, but the International Criminal Tribunal for Yugoslavia (ICTY) in the landmark Tadić decision treated JCE as a prosecutable form of “commission,” even though its Statute is also silent as to this form of responsibility and excludes conspiracy except with respect to the crime of genocide (in keeping with Article III of the Genocide Convention).

The ECCC invited Professor Antonio Cassese (left), among others, to submit an amicus curiae brief focused on the availability of the doctrine of JCE before the ECCC, with a particular emphasis on its applicability during the Khmer Rouge era. Incidentally, another defendant, Ieng Sary (below left), moved to disqualify the brief on the ground that it would be “result determinative” given that Cassese served on the appellate panel of the International Criminal Tribunal for the former Yugoslavia that rendered the Tadić opinion. The Pre-Trial Chamber rejected the disqualification challenge for lack of standing. 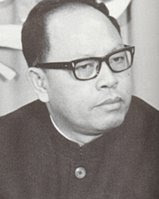 As Sary prophesied, the brief, which was filed on October 27, 2008, largely tracks the ICTY’s reasoning in the Tadić case. In particular, it identifies a collection of cases from the post-World War II prosecutions that were based on theories of common purpose or design and argues that these doctrines had crystallized into customary international criminal law prior to 1975. In addition, the brief argues that JCE liability would have been sufficiently established and assessable in domestic legislation and case law (including from France and Cambodia) to provide adequate notice to the accused in keeping with the principle of nullum crimen sine lege (no crime without law).

JCE is traditionally conceived of as encompassing three overlapping forms.
► The first (“basic”) mode provides for liability where an individual intentionally acts collectively with others to commit international crimes pursuant to a common plan.
► The second (“systemic”) form provides for liability for individuals who contribute to the maintenance or essential functions of a criminal institution or system, such as a concentration or detention camp.
► The third, and most controversial form, provides for extended liability, not only for crimes intentionally committed pursuant to the common design, but also for crimes that were the natural and foreseeable consequence of implementing the common design.
The theory with this latter form is that participants in the JCE willingly took the risk of the commission of additional non-intentional but foreseeable crimes.

Most relevant to S-21, of course, is the second JCE form. Under this form, Duch could be held liable not only for crimes he personally committed or ordered, but also for crimes that were

committed throughout S-21 pursuant to the prison’s criminal mission. (Photo at right is a display from S-21, now a museum, showing dozens of the thousands of people who passed through the prison. More photos are available here). The punishment accorded to the defendant can be modulated at the sentencing phase to reflect the precise degree of an individual’s involvement in, and thus culpability for, the crimes of the JCE.

It is not clear how many crimes might escape prosecution in the absence of JCE allegations in the indictment.
► As chairman of S-21, Duch can be held responsible for any crimes committed by his subordinates when he knew, or should have known, about such crimes and failed to take adequate steps to prevent or punish them.
► He can also be held directly liable for ordering or planning crimes, or for otherwise aiding or abetting them through the knowing or intentional provision of substantial assistance to the direct perpetrator.
The only crimes that seem to fall through the cracks without JCE liability are crimes committed by non-subordinates (individuals over whom Duch did not exercise effective command or control), crimes of which he was not aware and could not have reasonably been aware, or crimes that he did not order, plan, or substantially assist.

The third, extended, form of JCE could also be utilized to hold Duch responsibility for crimes (such as rape and other forms of sexual violence) that he did not order, did not intend to be committed, or did not know had been committed, but were nonetheless foreseeable given the abject conditions of detention prevailing at S-21.

Given the volumes of direct evidence against Duch, including his own partial confessions and admissions as detailed in the Closing Order, he is unlikely to escape responsibility entirely. Nonetheless, the Co-Prosecutors are no doubt looking to the future to ensure that JCE liability is available for other defendants in the dock who were likely very far from the commission of crimes, but nonetheless could be alleged to have participated in, indeed launched, a vast JCE to establish a utopian agrarian state, through violence where necessary, and to rid Cambodia of enemies of the revolution.