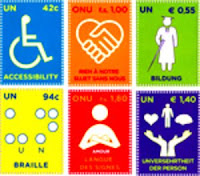 ... 2008 (today), is marked the International Day of Persons with Disabilities. It's the 17th annual commemoration of this U.N.-sponsored event. The 2008 theme is "Dignity and justice for all of us" -- an apt title given that, as we've posted, a week from today will be the 60th anniversary of the Universal Declaration of Human Rights, and that this spring the Convention on the Rights of Persons with Disabilities and its Optional Protocol were opened for signature, as we've also posted, and promptly entered into force. As IntLawGrrls readers know, the rights of disabled persons is the subject of an ongoing series. (credit for 2008 U.N.-issued stamps)

... 1854, in Australia, "[g]overnment troops and police stormed and ransacked" a "makeshift wooden barricade enclosing about an acre of the goldfields" at Ballarat. Inside, defending what was called the Eureka Stockade with "firearms and forged pikes," were about 500 miners, known as diggers, who opposed a government order that they obtain miners' licenses. When the

battled ended in less than half an hour, 22 diggers and 5 government troops lay dead. Yet the incident gave life to a national identity and to calls for democracy in Australia, and the stockade flag (left) "has been used as a symbol of protest by organisations and individuals at both ends of the political spectrum."
by Diane Marie Amann at 6:01 AM