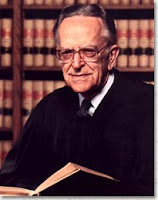 On this day in ...
... 1908 (100 years ago today), Harry Blackmun (right) was born in Nashville, a town in southern Illinois. He grew up in Minnesota, where he practiced law, 1st as a private practitioner and then as in-house counsel to the Mayo Foundation and Mayo Clinic, until 1959, when President Dwight D. Eisenhower appointed him to the U.S. Court of Appeals for the Eighth Circuit. From 1970 to 1994 he served as a Justice of the U.S. Supreme Court. Blackmun wrote the opinion for the Court establishing a right to privacy with respect to abortion in Roe v. Wade (1973), and subsequently spent much of the rest of his career defending the judgment. After his death in 1999, his papers were opened to the public at the Library of Congress. An excellent study of his life in light of those papers is Becoming Justice Blackmun (2006) by Linda Greenhouse, who recently retired as the New York Times' Supreme Court correspondent and soon will be a visitor at Yale Law School. 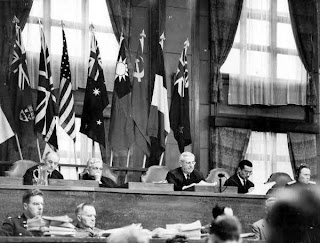 ... 1948 (60 years ago today), the International Military Tribunal for the Far East levied sentences of death on 7 Japanese men whom it had convicted of war crimes. "Sixteen others were sentenced to life imprisonment, and the remaining two of the original 25 defendants were sentenced to lesser terms in prison." The prisoners whom the Tokyo Tribunal (left) had condemned would be hanged 6 weeks later. (photo credit)
by Diane Marie Amann at 6:01 AM