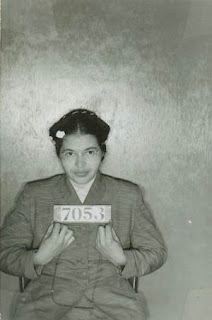 On this day in ...
... 1956, by means of a per curiam opinion, reported at 352 U.S. 903, which comprises 1 sentence and cites to Brown v. Board of Education and 2 other precedents, the U.S. Supreme Court affirmed that Alabama segregation laws that provoked the Montgomery bus boycott were unconstitutional. Among the leaders of that year-long boycott were Rosa Parks (left) the Rev. Dr. Martin Luther King, Jr. The Court's ruling in favor of the decision of a 3-judge district court in Browder v. Gayle (1956), the New York Times wrote,

was interpreted as outlawing state or municipal enactments anywhere that require separation of the races on public vehicles. It was thought to have placed a headstone at the grave of Plessy v. [F]erguson.

(credit for 1956 booking photo of Parks following her arrest for violating the segregation law)
... 2000, the 6th session of the Conference of the Parties of the U.N. Framework Convention on Climate Change (logo below right) convened at The Hague. Later in the month this meeting of the so-called COP6 would collapse, primarily "due to the US wanting carbon sinks as part

of the agreement (as well as other provisions like nuclear energy, etc.), which received enormous criticism," and to which European Union countries refused to accede.
by Diane Marie Amann at 6:01 AM