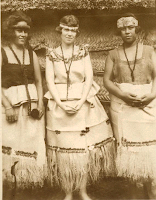 On this day in ...
... 1978 (30 years ago today), in New York City, Dr. Margaret Mead died from cancer. She'd been born 76 years earlier in Philadelphia, Pennsylvania, to a father who was a finance professor and a mother who was a sociologist. While a graduate student at Columbia, Mead was mentored by the anthropologist Franz Boas. At age 23 she traveled to the South Pacific for field research on her dissertation (center left), eventually published as the perennial bestseller Coming of Age in Samoa (1928). She worked with New York's American Museum of Natural History, wrote a column for Redbook magazine, and spoke out on U.S. social issues. Having had the opportunity to hear a Mead lecture shortly before she died, this IntLawGrrl can attest that she was a powerful speaker.
... 1983 (25 years ago today), inhabitants in the north of an Aegean Sea island broke with inhabitants of Greek ancestry to the south, and declared the Turkish Republic of Northern Cyprus to be an independent state. Ever since, as a de facto matter, the U.N.-controlled buffer zone in blue on the map at right has marked the division of Cyprus. As a de jure matter, however, no country other than Turkey 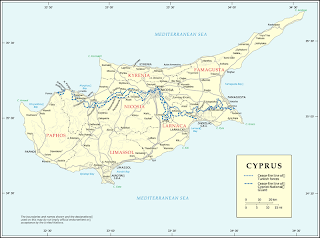 recognizes the breakaway territory as a state. On May 1, 2004, "the Republic of Cyprus became a full member" of the European Union. But Community law is "suspended in the area administered by Turkish Cypriots."
by Diane Marie Amann at 6:01 AM