... 1939, Nazi troops "stormed the dormitories of the University in Prague," killing 9 student representatives, and sending another 1,200 to concentration camps. Students from throughout Europe then fled to London, reorganized, and declared this day, November 17, International Students Day. The date held significance even afterward: on this day in 1973 (35 years ago today), the Greek miliary junta attacked students barricaded in a university building in Athens, an event that marked the beginning of the end of military rule. And in 1989, as we've posted, Czechoslovakian students again voiced opposition, this time against the Soviet-controlled government. "[I]n the end the regime fell," and today in "both the Czech republic and in Slovakia the day is celebrated as the Struggle for Liberty and Democracy Day."

... 1905, as a consequence of the Russo-Japanese War, Japan and Korea signed the Eulsa Treaty, which effectively rendered Korea a Japanese protectorate. "The Eulsa Treaty and the subsequent Japan-Korea Annexation Treaty of 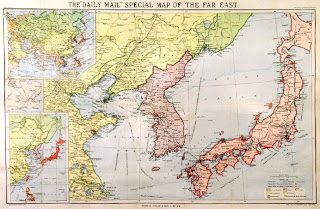 1910 were mutually declared 'already null and void'" in the Treaty on Basic Relations between Japan and the Republic of Korea concluded in 1965. (credit for 1910 map of Korea, in pink, and Japan, in salmon)
by Diane Marie Amann at 6:01 AM