On this day in ...
... 1893 (115 years ago today), in United States v. Rodgers, the U.S. Supreme Court analyzed centuries of state practice by colonizing powers such as Portugal, Spain, and Britain in the course of holding that "the open, uninclosed waters of the Great Lakes (above right), between which the Detroit river is a connecting stream," constituted the "high seas." Accordingly, the Court ruled that a U.S. statute gave the federal court in Michigan jurisdiction to try the defendant, alleged to have committed assault with a dangerous weapon on a ship "in the Detroit river, out of the jurisdiction of any particular state, and within the territorial limits of the dominion of Canada." Two dissenting judges maintained that only Canada had jurisdiction over the offense.
... 1923 (85 years ago today), Nadine Gordimer (below left) was born in South Africa, where she has lived all her life. Educated at a convent school, Gordimer attended Witwaterstrand University for 1 year before devoting herself to writing. Her subject is the transformation of South Africa during her lifetime:

Nadine Gordimer's subject matter in the past has been the 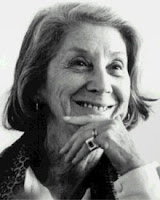 effect of apartheid on the lives of South Africans and the moral and psychological tensions of life in a racially-divided country, which she often wrote about by focusing on oppressed non-white characters. She was an ardent opponent of apartheid and refused to accommodate the system, despite growing up in a community in which it was accepted as normal. Her work has therefore served to chart, over a number of years, the changing response to apartheid in South Africa.

As we've posted, Gordimer was awarded the 1991 Nobel Prize for Literature.