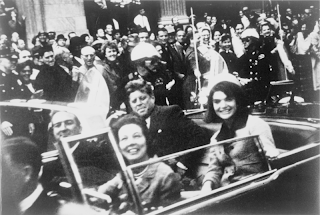 ... 1963 (45 years ago today), President John F. Kennedy died after he was shot by a sniper while riding in a convertible, part of a motorcade parade through the streets of Dallas, Texas. Vice President Lyndon Baines Johnson was sworn in to succeed Kennedy, who was 46 years old at the time of his assassination. (credit for photo of motorcade, with the President and 1st Lady Jacqueline Kennedy in back, before shooting)

... 1906, in Berlin, Germany, the International Radio Telegraphic Convention adopted SOS as the global distress signal. In Morse Code, the communications system most in use at the time, the letters are heard as dot-dot-dot dash-dash-dash dot-dot-dot.
by Diane Marie Amann at 6:01 AM