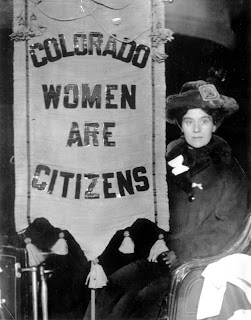 ... 1893 (115 years ago today), the all-male electorate of Colorado voted to extend suffrage to the state's women. "'Western Women Wild With Joy Over Colorado’s Election,' journalist and suffragist Caroline Nichols Churchill exclaimed." A similar referendum had failed 16 years earlier. The 1893 turnaround "made Colorado the first state to enfranchise women through popular referendum, and it happened over a quarter of a century before the achievement of national women’s suffrage in 1920." (photo

... 2000, the BBC reported that "Hillary Rodham Clinton, wife of the president, has won a seat for the Democrats in the Senate to become the only First Lady to win elective office in US history. " She would be sworn in the following January, the same month that Bill Clinton left office after 8 years as President. (photo credit)