My thanks to IntLawGrrls for this opportunity to guest-post on my article that is forthcoming in the Journal of International Wildlife Law and Policy:
"Adversaries or Partners? Science and the Precautionary Principle in International Wildlife Treaties."
As described in this prior IntLawGrrls post, the precautionary principle emerged from the sidelines to make a splash at the 1992 Rio Conference. Since making its debut on the international environmental law stage, the principle has been adopted in numerous international agreements, and has become an important principle of international environmental law. It has also experienced something of a backlash, however, with commentators arguing that it is incoherent and paralyzing or anti-scientific. My article identifies four themes that shed light on why the principle has become so contentious -- themes derived from examination of the work of four international treaties for the protection of wildlife:
► the Ramsar Convention on Wetlands;
► the Convention on Biological Diversity, or CBD (prior post);
► the Convention on Migratory Species, or CMS; and
► the Convention on International Trade in Endangered Species, or CITES (prior posts) (credit for logo above right).
In brief, the four themes show that the precautionary principle is primarily viewed as applicable where the parties agree that there are gaps in information or knowledge. Where the parties 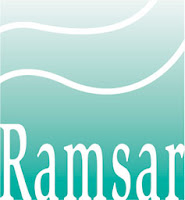 an leave parties and commentators to fear that decision-making will now occur without any objective guiding principles.
It should not be surprising, then, that even when the principle’s role is acknowledged, the safest option seems to be to put it back in the hands of the scientists, bringing us back to the security blanket of quantitative scientific data on which we can base our decisions.
I argue in my article that this approach fails to appreciate the nature and level of uncertainty in conservation -- both temporary and stochastic. I propose that decision-makers recognize the pervasiveness of this uncertainty by developing a distinct role for the precautionary principle that allows it to act as a complement to science. The precautionary principle would both encourage scientific research and reliance on scientific data, while still allowing decision-making to evaluate that data with a background principle of caution and ensuring conservation. While

this will result in some value judgments being brought to bear on decision-making, it should encourage these value judgments to be discussed openly and should provide incentives for decision-makers to seek out many sources of information and to rely on the very best scientific information available, rather than being satisfied with one or two sources of scientific data where more are available. To the extent this role takes the principle beyond its beginnings in Rio, I argue that this role is necessary as part of the process by which the precautionary principle will mature.
by Annecoos Wiersema at 6:03 AM

The precautionary principle does not ask us to question science. And questioning science is not a bad thing. There is a lot of bad science out there.

What it requests is that we not wait until there is irrefutable scientific evidence that our actions will cause harm to the environment, before we take steps to safeguard our environment.