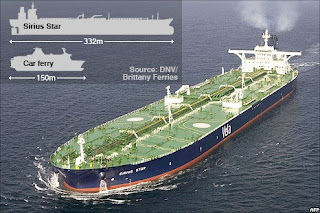 Piracy will be drawing the attention of the international community to a much greater degree after last weekend's hijacking of the very large Saudi-owned, Liberia-flagged oil tanker, the Sirius Star. This is reported to be the biggest tanker ever to be successfully grabbed by pirates. (photo credit) The pirates overtook the ship and its crew while they were sailing off the Kenyan coast headed for the United States. Now, the pirates have anchored the Sirius Star off the Somali coast. The ship has been reported to be carrying $100 million of oil, as well as an international crew, including nationals of the Philippines, Croatia, Saudi Arabia, Poland, and the United Kingdom.
This seizure indicates the mounting capabilities of pirates in the region as well as the difficulty of stemming the growing tide of modern piracy.
Despite a multinational naval task force having been assembled earlier this year to address Somali piracy, there have been continued and increasingly troublesome hijackings in the region. The International Chamber of Commerce Commercial Crime Services' report on the incident includes this statement from Pottengal Mukundan, the ICC International Maritime Bureau (IMB) Director:

Although this is just the latest of a large spike in attacks off the east coast of Africa, this incident is significant on two counts. Firstly, this is the largest vessel to have been hijacked. Secondly, the distance from the shore would suggest a highly organised operation -- this is not mere opportunism.

The BBC reports that the IMB's Piracy Reporting Centre

said it had records of 92 attacks against vessels so far this year, including 36 successful hijackings. This month alone, pirates have seized a Japanese cargo ship off Somalia, a Chinese fishing boat off Kenya and a Turkish ship transporting chemicals off Yemen.

An interactive map of pirate activity in 2008 can be found here.