As a child of the 1980s, I first heard the music of Miriam Makeba (left) after she performed with Paul Simon on his Graceland tour, but she became a household name when she appeared on the Cosby Show in 1991.
Her music is still a part of my daily life. "Pata Pata," Makeba's best-known hit (1967 video performance at the bottom of this post), happens to be a fabulous cha-cha. My dance partner and I have it in our favorite warm-up mix, and often argue about the song's interpretation. While it is a truly "fun" song, we disagree because she is actually listening to the music -- the playful, bouncing melody -- and I am listening to Makeba's struggle underlying it. I lose the argument every time, but Makeba's music truly expresses a myriad of emotions. As Nelson Mandela put it following Makeba's death last week:

Her haunting melodies gave voice to the pain of exile and dislocation which she felt for 31 long years. At the same time, her music inspired a powerful sense of hope in all of us.

While Makeba resisted being called an activist, she became a symbolic voice for the struggle against apartheid. Born in Johannesburg in 1932, Makeba began her singing career blending jazz and traditional South African music in the 1950s. In 1959, after starring in anti-apartheid documentary Come-back Africa, the regime revoked Makeba's citizenship. Thrust into exile, Makeba spent the following 31 years living between the United States, Guinea and Europe. Americans were comfortable with Makeba when her politics 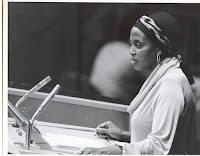 concerned South Africa. In 1963, during a period when her career flourished in the United States, Makeba testified without incident before the United Nations about the situation in her homeland, saying "the time had come for all mankind to act with firmness to stop those mad rulers from dragging the country into a horrifying disaster." But when Makeba married Stokely Carmichael, a black activist working with the leaders of the American civil rights movement, the American public turned their backs on her, despite Makeba's assertions that the relationship was not political. Her bookings were cancelled and her career ended in the United States -- until South Africa became a hot topic in the 1980s.
In a seeming dual exile, Makeba went to Guinea. She served as the country's UN Representative and won the Dag Hammarskjöld Peace Prize in 1986 for her work in this position. After another move, this time to Belgium, Makeba was finally able to return home to South Africa in 1990.
A citizen of the world, yet a citizen of nowhere, Makeba insisted:

I just told the world the truth. And if my truth then becomes political, I can't do anything about that.

This world, that punished her during most of her life for that truth, will always be indebted to her for it.