At the beginning of his campaign President-Elect Barack Obama stated:

No country has a greater stake in a strong United Nations than the United States.

The United States benefits from a global institution intended to advance the rule of law, the peaceful resolution of disputes, effective collective security, humanitarian relief, development and respect for human rights.

Indeed, bodies of the United Nations have played a number of roles in protecting and promoting international human rights. For example, the Security Council has been responsible for determining when humanitarian intervention is necessary, while the specialized agencies give technical assistance to countries to help them promote human rights in a number of areas. The International Court of Justice has adjudicated a number of human rights issues but that has been dependent on the consent of the States, something that is not always forthcoming. The General Assembly has been the body responsible for the development of international standards, a task that was carried out by the Commission on Human Rights (CHR) since its inception in 1948. The Commission also had the capacity to address human rights situations by passing resolutions which are the basis for the mobilization of shame – one of the main tools available to affect countries who violate human rights but who often cannot be held accountable in courts or other adjudicative bodies. Again, the CHR was the main body that initiated investigative procedures that made it feasible to mobilize shame by having special rapporteurs and working groups look into violations of human rights on a variety of topics, including those that were focused on specific countries. While the treaty bodies play the role of overseeing country compliance with the specific human rights treaties, the CHR is able to look at country violations whether or not they have signed on to those treaties.
The country-specific procedures included the public Resolution 1235 procedure and the confidential Resolution 1503 procedures which were developed in the 1960s after the two main treaties implementing the Universal Declaration of Human Rights were drafted and sent to the General Assembly for approval: the International Covenant on Economic, Social and Cultural Rights and the International Covenant on Civil and Political Rights. Theme procedures were later developed in order to address individual complaints more effectively as well as further the jurisprudence on specific topics. 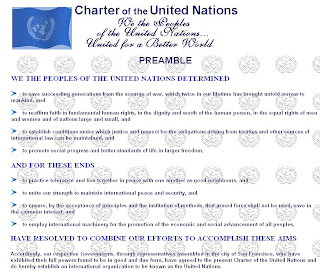 The country-specific procedures always were much more political and it is important to assess their effectiveness in that context. The bottom line has been, despite their political nature that countries of all kinds and levels of development will fight to prevent resolutions from being passed against them. An indication that they do in fact care about what the U.N. bodies might say about them.
A couple of examples help to highlight the fact that the U.N. procedures have indeed been helpful in preventing and promoting international human rights standards:
► One involved South Africa, where the policy of apartheid violated in the most blatant way the prohibition against race discrimination that was one of the basic principles of the United Nations Charter. The work of the CHR for many years ultimately led to the economic embargo that eventually forced not only the change in the policy but in the government as well by peaceful means.
► Another less direct example was the role played by the CHR in stopping the death penalty for offenders under 18 in a number of countries. The attention paid to that issue by its expert body, the Sub-Commission on Promotion and Protection of Human Rights, and the CHR itself, put

pressure on a number of countries to change its laws or stop the practice, including Pakistan, Yemen, and Saudi Arabia. Even the United States, which was the country with the largest number of violations of the prohibition against this sentence, eventually stopped the practice after a number of resolutions and statements by countries increasingly referred to the practice. Indeed, the U.S. Supreme Court made reference to the various resolutions by the CHR on the topic in interpreting the United States resolution to prohibit the practice.
Charging that the CHR had become to political, however, the United States initiated the effort to create the Human Rights Council. It was successful in those efforts in 2006, with the passage of Resolution 60/251 by the General Assembly. Whether that body is less political, is difficult to assess, especially since it is hard to imagine that any body representing governments would not be political. There have been some positive changes such as the limit of terms to two (six years) for any one country and the suspension of countries that are human rights violators. Also, having a more direct route to the General Assembly and having more meeting should make it address problems more efficiently and effectively. The politics continue and the potential control of majority votes by the Asian and African countries is problematic, but over the course of the two years the Council has been able to take some positive steps towards greater protection of human rights.
The Council has been able to pass more concise resolutions focused on human rights principles with greater consensus as exemplified by the resolutions on the rights of the child and the transfer of toxics. It was able to address the specific topic in a special session – that dealing with the emergency situation related to the right to food.
It is time for the United States to return to its leadership role in the protection of human rights.
To do so, it needs to take a more diplomatic and less political approach to addressing human rights concerns. Perhaps focusing less on Cuba and more on more massive human rights violations in countries such as Sudan would be helpful. It would also be helpful if it reiterated its 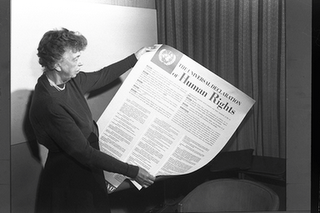 commitment to the human rights standards that were enunciated in the Universal Declaration of Human Rights under the leadership of Eleanor Roosevelt (left) sixty years ago. And in particular acknowledge both civil and political as well as economic, social and cultural rights as was done in that document and reaffirmed by the international community ever since.

(Portions of this blog post are taken from Connie de la Vega, "Just Back From the Human Rights Council," 11 April 2008 Panel Discussion at the annual meeting of the American Society of International Law, published in 102 ASIL Proceedings (2008))
by Connie de la Vega at 6:02 AM