Vagaries of witness protection before the ICC

Germain Katanga and Mathieu Ngudjolo Chui (right), both hailing from the Democratic Republic of 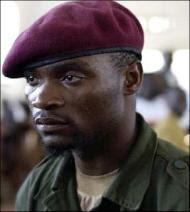 Congo, are two of the accused awaiting trial before the International Criminal Court. The two are implicated in attacks against civilians in the Ituri region of the DRC while they were members of ethnically based militia. (Katanga began as a military leader of a predominantly Ngiti combatant group, the Force de Résistance Patriotique en Ituri. He was eventually appointed Brigadier-Général of the Forces Armées de la République Démocratique du Congo (FARDC) by the President of the Democratic Republic of Congo, Joseph Kabila. Chui also eventually became a member of the FARDC when the militia group to which he belonged was integrated into the armed forces. See here for a series of concise posts on the history of the world war being waged in the Congo.) (photo credits)

The Prosecution originally sought to charge the two with murder/willful killing, inhumane acts/inhumane treatment, sexual slavery, and rape (as crimes against humanity and war

crimes), in addition to the war crimes of using child soldiers in combat, committing outrages upon personal dignity, intentionally directing an attack against a civilian population, pillage, and destruction of civilian property. The pre-Trial Chamber recently confirmed all but a few charges (those for inhumane acts and outrages upon dignity).

The gender crime charges stem from allegations that civilian women were raped and forcibly taken to military camps, where they were given as “wives” to their captors, or were imprisoned in holes in the ground where they would be raped by other prisoners or combatants. The defendants were indicted as principals (co-perpetrators) to the crimes committed by their subordinates pursuant to a common plan to commit such crimes. The theory of responsibility is one of co-perpetration, where the defendants exercised “joint control” over the crime as a result of being in a position to make an “essential contribution” to it. Notably, neither defendant was charged under Article 28 of the ICC Statute, which sets forth the superior responsibility

doctrine; this failure to charge further contributes to the desuetude of the doctrine in international criminal law.

Judge Anita Ušacka (Latvia) (left) partially dissented from the confirmation decision. In particular, she argued that the Prosecutor’s evidence was not sufficiently strong to establish “substantial grounds to believe” that the suspects are criminally responsible for the crimes of sexual violence (the standard necessary to confirm the indictment pursuant to Article 61 of the ICC Statute). In her estimation, the evidence did not suggest either
► that the suspects intended for rape and sexual slavery to be committed during the attack in question, or
► that the suspects would know that these acts would be committed “in the ordinary course of events.”
She reasoned that general evidence that crimes of rape and sexual slavery were committed throughout Ituri is insufficient to infer the suspects’ intent and knowledge that the particular crimes charged would occur or had occurred. Rather, she suggested, there was some evidence that the defendants actually took steps to punish individuals who had abducted women of their own ethnicity.

In her analysis, Judge Ušacka seems to have fallen sway to the misperception that acts of sexual violence committed during armed conflicts or repression are simply opportunistic or private crimes reflecting personal motives and desires that are unconnected to, or simply capitalizing upon, the prevailing state of war. Rather, as Security Council Resolution 1820 confirms, such crimes are integral to any armed conflict, genocide, or campaign of ethnic cleansing rather than as an isolated or peripheral phenomenon. Indeed, gender violence is regularly employed to exacerbate other forms of violence and repression. Where women are being kept in detention with male guards in situations of ethnic conflict, we now know that it is inevitable that they will be sexually assaulted.

Although they squeaked by the confirmation stage, the sexual violence charges barely made it into the Prosecutor’s Charging Document at all. In connection with the confirmation of the indictment against the two defendants, the Prosecutor had originally requested protective measures from the Registry for two witnesses whose testimony was central to the sexual violence counts. The request was, however, rejected by the Registrar. Nonetheless, the Prosecutor, without authorization, arranged for the preventative and temporary relocation of two witnesses for their safety, citing his obligations to ensure the security of witnesses under Article 68(1) of the Statute. That Article sets forth the duty of the Court to take appropriate protective measures for the safety, well-being, dignity, and privacy of victims and witnesses and obliges the Prosecutor in particular

to take such measures particularly during the investigation and prosecution of such crimes.

The presiding judge, Sylvia Steiner (Brazil) (left), ruled that the Prosecutor had exceeded, and indeed misused, his mandate in unilaterally relocating witnesses in opposition to the competent ICC organ—the Registry. At the same time, she conceded that there may be “exceptional circumstances” involving “a serious threat of imminent harm” related to a witness’s cooperation with the Court (para. 35) in which some preventative relocation might be allowed. Given that these witnesses were in effect “unprotected” and thus at risk, she ruled that even redacted or summary versions of the witnesses’ testimony could not be admitted into evidence. Judge Steiner also strongly criticized the Registrar for refusing protective measures with respect to a particular witness by, in effect, raising the bar for protection to require proof of a concrete threat, and ordered the witness’s inclusion within the protection program.


The impasse was eventually resolved when the witnesses were relocated by the Registrar, which opened the way for the reintroduction of the sexual violence charges. The case thus proceeds with these charges intact.
by Beth Van Schaack at 6:02 AM