The economy, of course, is on everyone's minds these days, and when asked how it's likely to affect my field -- immigration -- I think of the obvious: fewer jobs, fewer remittances to send home, and eventually, fewer immigrants, particularly the low-skilled and undocumented. But here's a grimmer possible outcome: increased xenophobia and violence against immigrants. We've seen it before, from Marseilles to Johannesburg -- when unemployment rises, so does anti-immigrant sentiment, which quickly turns to violence against those whom even the police 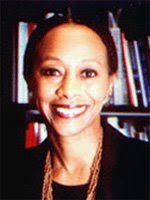 often don't protect. Indeed, we see politicians exploiting racial hatreds in order to get elected, and local officials at best turning a blind eye to abuse of migrants, and at worst, participating in the violence.
This concern may underlie yesterday's press release in which the UN Independent Expert on minority issues, Gay McDougall (right), and the UN Special Rapporteur on contemporary forms of racism, racial

discrimination, xenophobia and related forms of intolerance, Githu Muigai (left), expressed "grave concern" over the recent increase in violence against Roma in Europe. The Roma, who migrated to Europe from India in the 11th century, have continually suffered extreme discrimination by state actors, from genocide at the hands of the Nazis to recent reports of coercive sterilization by the Czech government and police brutality in Greece and Romania. In McDougall's words, “Extremists may feel they have license for their attacks when the message they receive from government activities in other spheres is also that the Roma are a problem.”
So what does this all have to do with immigration? While Roma may be citizens of the country in which they reside, their nomadic lifestyle may lead them to cross borders without authorization. Even in states where they are citizens, Roma may face numerous obstacles to obtaining residency documents including exclusion as the "other". This lack of regularized legal status combined with government neglect or hostility is an explosive combination that may lead to severe violence, such as the incident in the Czech Republic that prompted the UN experts' press

release, in which far-right extremists attempted to attack a Roma community with stones and petrol bombs. As the world economy faces perilous times, we must be particularly vigilant in ensuring that financial woes aren't translated into increased assaults against migrant communities. As McDougall suggests:

Governments must strongly condemn such actions. Moreover they must be committed to finding ways to create safe environments for all by carefully monitoring and strengthening their own anti-racism activities, through leadership and public education, by swiftly denouncing hate speech and prosecuting the racist and violent actions of others in society.

Glad you posted on this important topic, Jaya! --Hope