The Gravity of International Crimes

of the International Criminal Court (ICC, left), gravity operates as an express limitation on the Court’s jurisdiction and as a guide to the exercise of prosecutorial discretion. And yet, there is little in the Court’s Statute, Elements of Crimes, or other constitutive documents elucidating the quantitative or qualitative contours of this key concept.
An Appeals Chamber of the ICC has recently made public its first ruling on gravity and set forth a blueprint for determining when crimes are sufficiently grave to justify ICC jurisdiction. In so doing, the Appeals Chamber appropriately refocused this inquiry on qualitative rather than quantitative factors, ensuring flexibility in pursuing cases and enhancing the deterrent power of the Court. The ruling is significant not only within the context of the ICC, but also as a source of guidance for other international, hybrid, and national tribunals that must determine which international crimes deserve the exercise of extraordinary jurisdiction. As we’ve discussed before, this very question is of acute relevance before the Extraordinary Chambers in the Courts of Cambodia, which are now considering a disagreement between that tribunal’s Co-Prosecutors as to whether they should expand their investigations beyond the five high-ranking individuals already in custody.
The concept of gravity permeates the ICC Statute at several key points. According to Article 5(1), the “jurisdiction of the Court shall be limited to the most serious crimes of concern to the international community as a whole.” The prosecutor’s decisions (1) to initiate an investigation into a situation and then (2) to commence a prosecution against a specific individual are premised in part on a determination of a case’s admissibility under Article 17. Article 17(1), in turn, invokes the concept of gravity and provides that a case will be considered inadmissible if it “is not of sufficient gravity to justify further action by the Court.” In addition, pursuant to Article 53, the prosecutor may decline to initiate either an investigation or prosecution where there are “substantial reasons to believe that an investigation would not serve the interests of justice,” taking into account the gravity of the crime and the interests of the victims. Decisions to decline to initiate either an investigation or a prosecution are subject to some oversight by the Pre-Trial Chamber. In the case of a referral from the Security Council or a State Party, the Pre-Trial Chamber can “request the Prosecutor to reconsider [his or her] decision” not to proceed if so requested by the source of the referral. A decision by the prosecutor not to proceed with an investigation or prosecution on the basis of the “interests of justice” (which includes a consideration of the crime’s gravity and the interests of victims) is “effective only if confirmed by the Pre-Trial Chamber.” On the basis of these provisions and prevailing interpretations thereof, gravity concerns are thus relevant before the ICC at two key moments: during the identification of potential situations to investigate and in the choice of particular cases (i.e., crimes or individuals) to investigate and prosecute.
Although crucial investigative decisions are premised upon an objective assessment of gravity, the Statute provides little in the way of concrete guidance about how to undertake this

assessment. In his published criteria for the selection of cases and situations, the ICC Prosecutor (left) has indicated that in assessing gravity, he will focus in part on the number of victims of particularly serious crimes, with reference to the scale of the crimes and the degree of systematicity in their commission. At the same time, he indicated that other more qualitative factors would also be relevant, such as whether the crimes are planned, cause “social alarm,” are ongoing or may be repeated, exhibit particular cruelty or reflect other aggravating circumstances, target especially vulnerable victims, are discriminatory in their execution, or involve an abuse of power. In addition, the prosecutor announced that he will consider “the broader impact of the crimes on the community and on regional peace and security, including longer term social, economic, and environmental damage.” By way of example, he noted that the situations currently under consideration in Central and East Africa involved thousands of 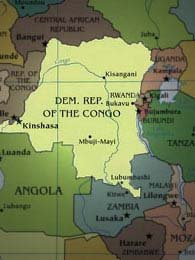 displacements, killings, abductions, and large-scale sexual violence.
The ICC adjudicated these gravity provisions for the first time in the cases arising out of the ongoing regional war being waged in the Democratic Republic of Congo (map right). The rulings emerged in the context of the prosecutor’s request to the ICC’s Pre-Trial Chamber for the issuance of arrest warrants against two defendants: Thomas Dyilo

Although the Pre-Trial Chamber issued the arrest warrant for Lubanga, it determined that Ntaganda was not a central figure in the decision-making process of his group and lacked any authority over the development or implementation of policies and practices (such as the negotiation of peace agreements). This was notwithstanding the fact that Ntaganda was in a command position over sector commanders and field officers. As such, the case against Ntaganda was deemed inadmissible, and the arrest warrant did not issue.
The Prosecutor appealed this decision, arguing that the Pre-Trial Chamber committed an error of law in defining gravity too narrowly for the purpose of considering the issuance of an arrest warrant against Ntaganda. The Appeals Chamber ruled as a preliminary matter that an admissibility determination was not a pre-requisite to the issuance of an arrest warrant. Turning to the issue of gravity, the Appeals Chamber determined that the Pre-Trial Chamber had erred in its interpretation of gravity in several key respects.

The Court thus reversed the finding of inadmissibility and remanded the case to the Pre-Trial Chamber to determine on the basis of Article 58(1) alone whether an arrest warrant against Ntaganda should issue. The Pre-Trial Chamber recently unsealed the arrest warrant against Ntaganda charging him alongside Lubanga with enlisting, conscripting and using child soldiers in armed conflict. Ntaganda remains at large.
by Beth Van Schaack at 6:02 AM


The Mobilization for Justice and Peace in D.R. Congo (MJPC) announced today that it has launched a new online petition that can be signed at http://www.gopetition.com.au/online/24459.html asking concerned citizens around the world to demand MONUC to take concrete actions to arrest Bosco Ntaganda wanted by the International Criminal Court (ICC) for war crimes.

MONUC is currently the largest UN peacekeeping mission in the world with more than 17,600 uniformed personnel from 58 countries with an annual budget of more than $1bn.

In April 2008, the International Criminal Court (ICC) unsealed the warrant of arrest against Mr. NTAGANDA whic was first issued on 22 August 2006 by Pre-Trial Chamber I. The Chamber concluded that there were reasonable grounds to believe that from July 2002 to end of December 2003, Mr. NTAGANDA had played an essential role in enlisting and conscripting children under the age of fifteen years into the FPLC and using them to participate actively in hostilities.

According to Amede KYUBWA, Executive Director of MJPC, "concerned citizens around the world are being asked to contribute to the arrest of NTAGANDA by putting pressure on MONUC to take whatever necessary actions to arrest this war criminal." He decried MONUC's failure to take appropriate action to arrest him despite evidence showing that they know his whereabouts. MJPC urges MONUC to treat those who have committed war crimes in Congo as criminals and refrain from helping them to be appointed to high governmental posts. "rewarding war criminals with the governmental posts does nothing else than promoting more war criminals, preventing justice to thousands of victims including children and women who have suffered at the hands of these criminals and it shamefully contradicts directly the values and principles of the U.N" said Mr. KYUBWA

About the MJPC.
MJPC seeks to add a voice in advocating for justice and peace in the Democratic Republic of the Congo particulary in the east of the D.R. Congo where thousands innocent civilian including children and women continue to suffer massive human rights violations while armed groups responsible for these crimes go unpunished. Visit the Online Museum of Victims of War in Congo in Congo at http://www.yoursilenceoncongo.org to see the unacceptable barbarity that you could help stop by signing the petition. For more information on MJPC and the activities, visit the wbsite www.mjpcongo.org. or call Amede Kyubwa @ 916 753 5717. The online petitions can be signed at the following addresses: for arresting NKUNDA at http://www.gopetition.com/online/23604.html and arresting NTAGANDA at http://www.gopetition.com.au/online/24459.html