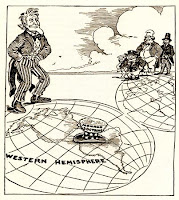 [T]he occasion has been judged proper for asserting, as a principle in which the rights and interests of the United States are involved, that the American continents, by the free and independent condition which they have assumed and maintain, are henceforth not to be considered as subjects for future colonization by any European powers ...

This Monroe Doctrine, proclaimed with respect not only to the United States but also to countries throughout North and South America, has persisted as a tenet of U.S. foreign policy. A contemporary invocation occurred in December 1984, when Dr. Robert Gates, the current Secretary of Defense, who's slated to remain so in the next administration (as posted above), but then Deputy Director of the Central Intelligence Agency, wrote a letter to his superior in which he cited the doctrine to justify U.S. support for the contras who were fighting Nicaragua's Sandinista government. 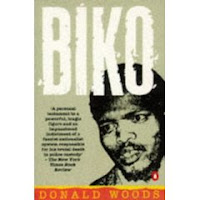 ... 1977, the chief magistrate of Pretoria accepted findings that South African security forces were not to blame for the death of Steve Biko, 30, the leader of the Black Consciousness Movement who "died of extensive brain injuries sustained" 5 days after "a scuffle with police" who were interrogating and detaining him. No trial ever has been held respecting the apartheid-era incident, described in jarring detail in Donald Woods' book Biko (1978) and depicted in the film Cry Freedom (1987).