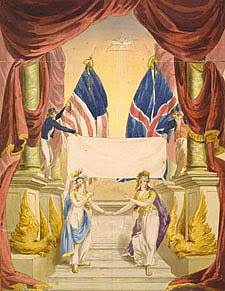 On this day in ...
... 1814, British and American representatives signed the Treaty of Ghent in the Belgium city of the same name. Thus ended the War of 1812, an event celebrated in the contemporary drawing at right. (credit) Diplomats had labored 4 months to negotiate the pact; the U.S. Senate would give its advice and consent in February 1815. For the most part the treaty restored U.S.-British relations to what they had been before the war began.
... 1989, Nicolae and Elena Ceausescu, the deposed President and 1st Lady of Romania, were "shot by a firing squad after a secret military tribunal found them both guilty of crimes against the state." Demonstrations erupted throughout the country, and about 100 persons died before unrest subsided.